theSMTP not only take the sender convenience into account, but gives equal importance to the recipient’s security and privacy. Today’s blog attempts to make the recipient aware of some commonly identified scam emails. It also tries to list some methods to detect scam emails before falling victim to the internet fraud.

I’ve just looked into this email concocted in a way to appear as sent form United States Government. At least the from name suggests so, and the subject line says “Attn benefited email owner”.  One may take it seriously as an alert sent by US Government, especially if somehow the sender succeeds to deliver it in recipient’s inbox bypassing the spam filters.

But in actual, the email has nothing to do with United States Government. It is kind of popular scam email pattern, where the sender tries to appear as some Government Department in order to obtain some important information from the recipient. Sometime you may get this email from some self-proclaimed UNO representative. But as soon as you open the email, you start doubting the authenticity of the sender. Email inboxes on local domains are mostly vulnerable and easy prey for these emails. It is one of the famous Nigerian Scam emails that you mostly receive in Spam/Junk folder in your inbox of Major ISPs. Providers like Gmail also attach warning alerts with the kind of messages, here is an example.

If you are having an account with Paypal, you too might have taken it seriously at some point, if not all the times. The sender at the first place always tried to keep it as real as he can. He would show the “Paypal Inc” as the sender from name, will craft somewhat similar looking subject line and message.  But as you open the email, you will start noticing the fishy aspects.

If somehow the sender is too intelligent to hide the fishy part from your first gaze, still don’t reply to this email or click the link within the email body. Go and open up the header of the email and you will find that the originating domain will never be paypal.com. Spam filters always trigger upon spotting such content and some providers also give a warning message about the suspicious nature of email.  Always try looking into the email headers before getting deceived. 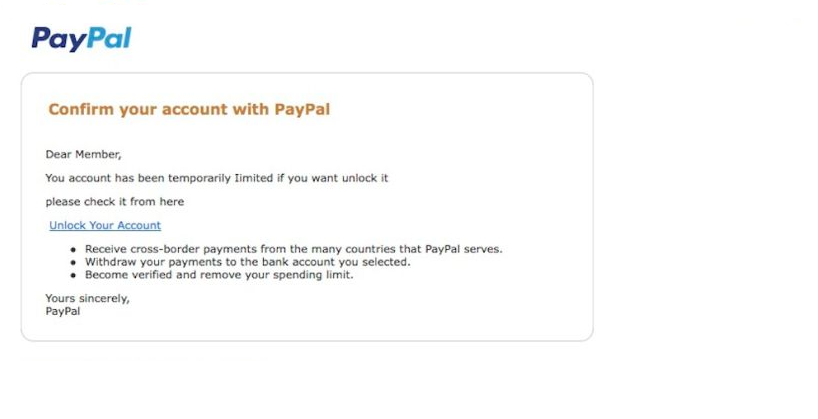 You may come across emails that are sent from an email address or domain looks pretty much similar to some known domain or email. Above image is an example that says it is from Paypal a known name for most of us. And by some means this email has bypassed the spam filters and managed to approach the Gmail inbox. Everything seems perfect for the recipient to click the link. But going into the details would let you know that the email has nothing to do with Papyal. And the only intention of the sender is to grab recipient’s financial or personal information.Here is what the original header of the email says?

You can do list of things to detect spoofing, scam or phishing emails on time. Suspect every unexpected email message that you receive. Always pay attention to the message format, and never straightaway share your personal information, especially when the message appears fishy. Do take interest in reading the message headers to grab valuable information about sender. Make sure you well recognize the original sender and originating domain, before sharing any personal information. Email clients like Gmail are trying hard to fight the scam messages. The spam triggers/ filters and getting smarter every day. The spam filters scan through the email before it delivers it to your inbox. And large numbers of fraudulent emails are automatically sent to the Spam/Junk, with a warning message that says something like.

About the Author: Adnan Ahmed